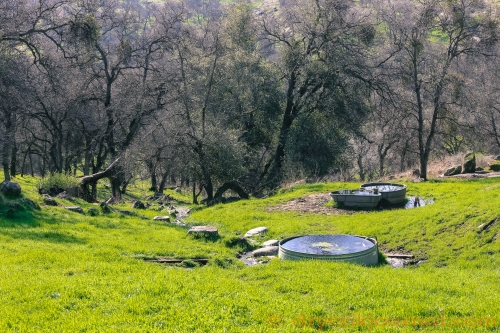 With little creeks running either side of the dirt track to the Windmill Spring, we were surprised to see so much water flowing from the spring box to the trough, a full 3/4″ pipe full (click to enlarge). Quite a change from the weekly maintenance and a quarter-pipe full or less for the last four years. We’ll see how long it lasts.

Eagle at the Windmill Spring 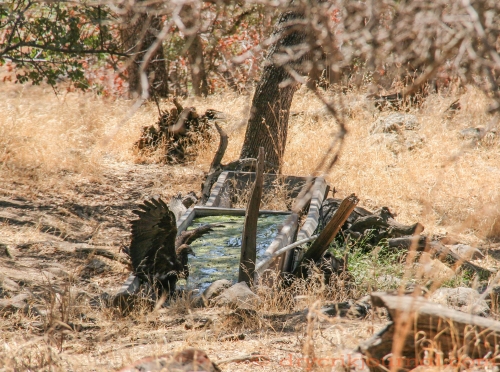 All tracks lead to water on a dry year like this one when good springs and stockwater may be miles apart. Checking the Windmill Spring yesterday, after feeding the cows on the Paregien Ranch, a young adult Golden Eagle I had seen a few weeks ago at the bottom water trough, was back for a bath. 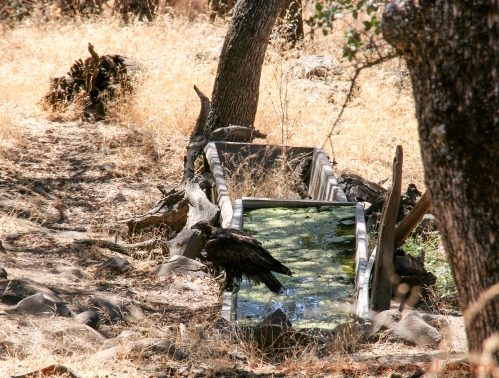 The first time, it had been getting a drink while I spent fifteen minutes or so unplugging a pipe before I noticed it sitting on the edge of the old redwood trough in the oak trees about 150 feet below me. Yesterday, I could see its dark shape from the pickup when I arrived. Like the cattle, the wildlife becomes accustomed to the few humans they see, so I meandered closer snapping photos as I went. 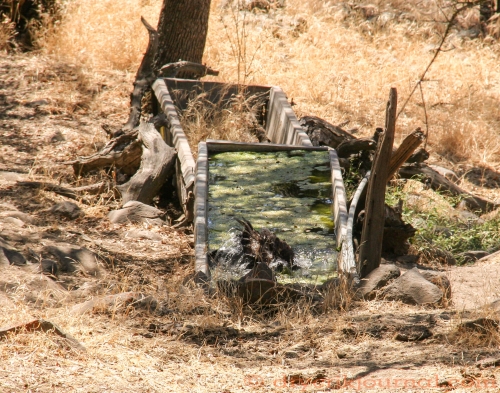 I stopped at about 100 feet and it decided to continue its bath despite my presence. 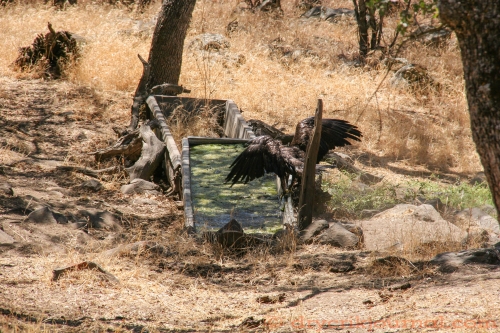 After splashing and literally rolling in the water for several minutes, it was too wet to fly… 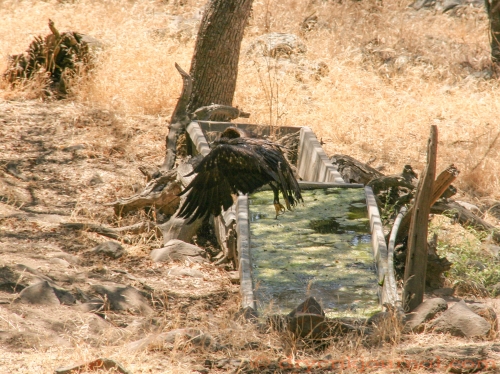 …and ran up the hill beating wings to dry its feathers. 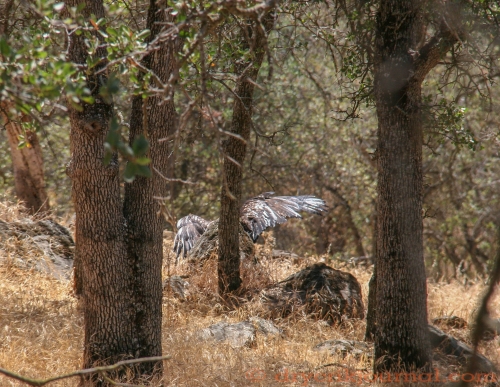 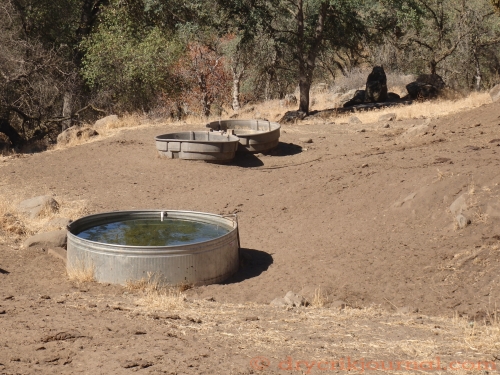 Meanwhile, back at the Windmill Spring, the cows have gotten ahead of the water. While trenching and plumbing the abandoned well before we install a solar pump on the Paregien Ranch, I’ve been checking the Windmill Spring every day, counting cows and noting how fast the troughs were recovering. As other water sources are drying up, the number of cows has increased from 30 to 46 this past week with temperatures well above 100°. 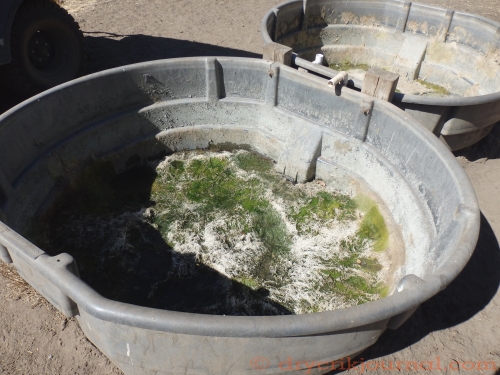 Both overflow troughs were all but dry this morning, and only three cows had watered. Fortunately, we have the two wells near the corrals, one with a submersible pump and 11hp generator I ran for about five hours yesterday towards filling the 2,000 gallon trough and 5,000 gallon tank that normally we utilize only at branding and weaning. I topped off the tank this morning, but only the tracks of a couple of cows had been around the trough. So I went off in search of cows to lighten the load on the Windmill Spring. 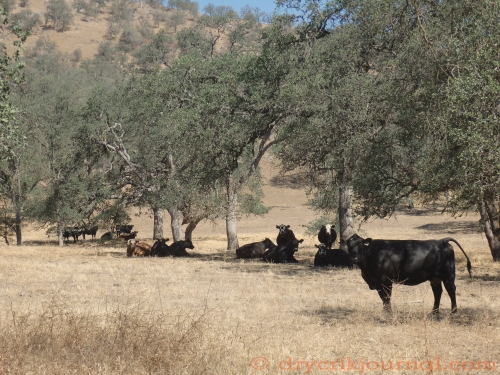 About a half mile away, I found some in the shade near the middle spring that is almost dry 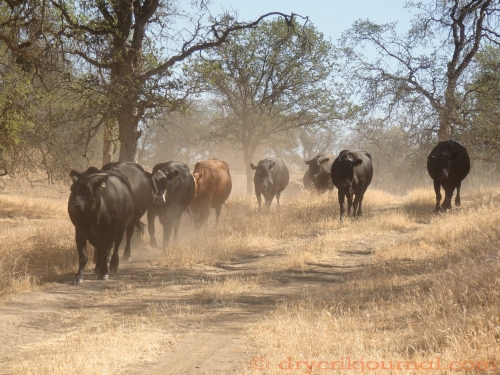 and convinced them to follow the Kubota and a bale of hay to new water. 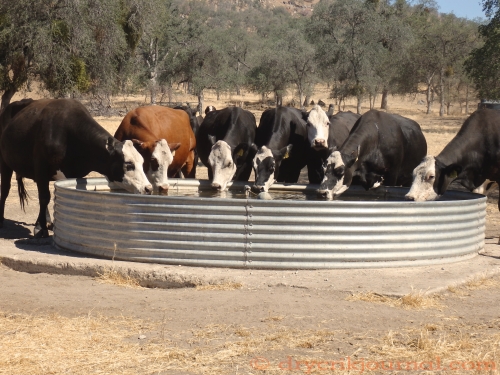 Obviously they hadn’t watered yet today. With a little luck, they will center on this trough instead of the Windmill Spring. Until the solar pump is installed, I’ll have to run the submersible twice a week to keep the top half of the tank full.

Scenarios such as this are happening on ranches all over the arid West. 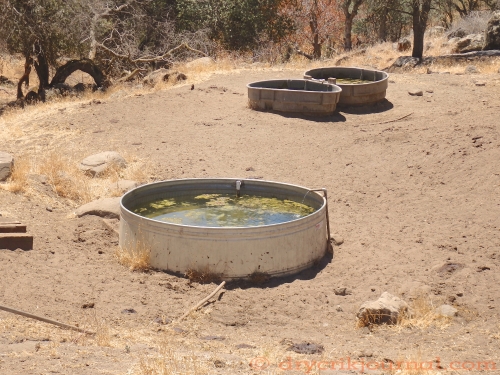 I was doing some preliminary work for the installation of a solar pump in an abandoned well yesterday, after which I checked the water at Windmill Spring. No windmill anymore, it still carries the name and the only reliable water we have at the Paregien Ranch this year. It’s fed from a spring box and fills a series of troughs. 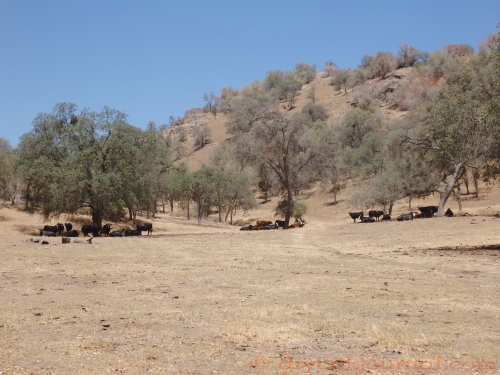 These girls had just watered before I arrived, having seen them earlier in the day about a mile away as I was putting out protein supplement tubs. 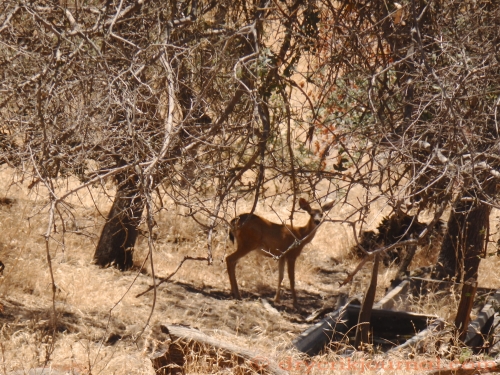 When I got to the spring, this girl was watering at the last trough, constructed of redwood well-before my time. 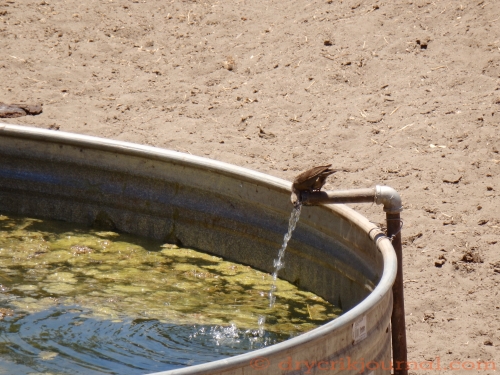 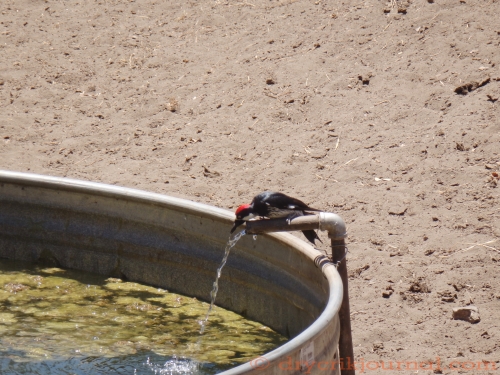 Water is scarce and everyone knows where it is. I could have taken wildlife photos all afternoon.