King of the Garden

Snake on the Sabbath 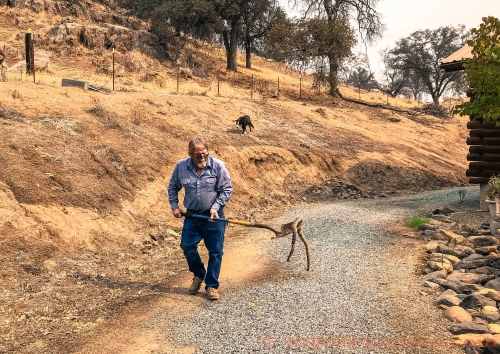 If it isn’t enough to worry about Covid-19, smoke in the canyon from over 500 fires in California, last week’s 110+° heat, or pre-election politics, we seem to have been visited by more rattlesnakes than normal, undoubtedly following the ground squirrels focused on the orchard and garden, even though I’ve trimmed the squirrel population around the house by 500 or so this year. Don’t despair squirrel lovers, 300 yards from the house, the ground continues to be alive with them, yet another hatch ready to move in.

Tessa, our 10 month-old Border Collie was tethered on the front deck to keep her out of trouble when she spotted this one near the orchard, herded by a single small bird to the back of the house, probably a house finch at the snake’s head. Hair up on her back, Tessa raised a serious ruckus. After spotting it, Robbin called me from the garden, retrieved the bird shot, and I dispatched the snake.

Typically in the summer, the older dogs retreat under the deck where we’ve killed two rattlesnakes this year, and another at the dog pens, all big. We wonder, of course, at how many we don’t see.

With the help of Ken McKee, we’ve been fine tuning our bird shot loads now that the factory loads, that used to be #9 shot, have become more of a home defense load with #4 shot. With such a poor pattern, the first snake under the deck required 5 shots of factory loads. We’ve been experimenting with #12 shot, but the .38 plastic shot shells are brittle and require a significant crimp to keep them in the case after recoil in revolvers. The significant crimp keeps the pattern small at six feet, the plastic shot shell acting more like a slug. After having one snake get away, and another that required four shots, I moved back to ten feet this morning. With still enough poop to penetrate the snake, I paralyzed him on the first shot.

Supervised by Jack, our 15 year-old Border Collie, I am removing this four-footer to the end of the driveway, my designated feed ground for the buzzards, to emulate roadkill. 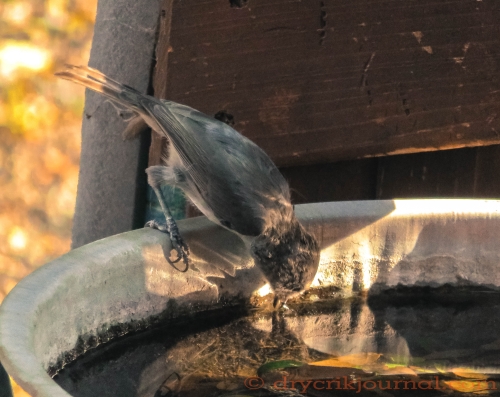 A pair of precocious little gray birds I’ve never noticed before have spent the summer with Robbin and me, drinking several times a day at the dog’s water on the deck. Smaller than our Western Flycatcher and with a slight crown like a Kingbird, we assumed they were juveniles. At 111 degrees they water more frequently now, arriving open beaked, the female seems shier and more bedraggled than the male. The best ID I can come up with is that they are Wood Pewees, but I defer to others more qualified.

Besides the livestock water troughs that are difficult for many birds to drink from, our inadvertent plumbing leaks draw a wide variety of birds from all around. Now that the spring Bird Wars are over, a territorial drama where the eggs and babies of one nest feed the babies of a larger species, they seem to have found peace in the shade of our yard. Woodpeckers cling to sprinkler heads to get a drop at a time, coveys of quail include a pipeline leak on their daily rounds and Towhees cool beneath the mist of our garden irrigation. It’s quite a show if you can stand to be outside.

You can almost smell them curled
asleep or stretched across smooth rocks,
shining shades of earth, charming

and deadly. They don’t want trouble,
come home each year to make a living,
to together stand above the grasses

wrapped in urgent procreation
as the dry seeds roll in painted gourds—
the dance begins, as they collapse

and rise again. To stay connected,
I’m told that the penis is shaped
like a T —barbs both sides— and

that she can draw upon the sperm
as needed for years. Generations
of brothers and sisters know

their way home. Grandmothers
carry the future and grandfathers watch
and listen, crawl into your mind

to know your secrets, to hear
your confessions to all the ridgeline
men long-gone before you.

Wild entanglements
clutch the fate of the planet
with thin filament. 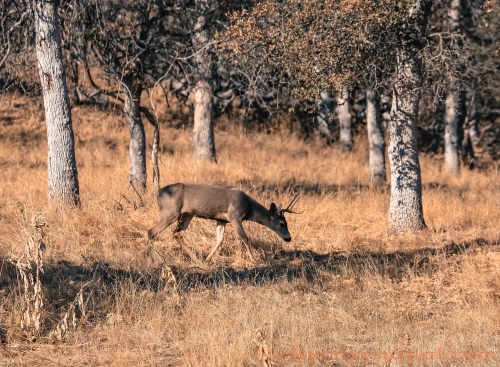 Having slain hundreds, another battalion digs in
to undermine the well and water trough, to scout
the garden for an attack on the last tomatoes.

The quail have made a comeback in coveys,
strings of babies trailing on training wheels
making circles, mornings and evenings.

Before our eyes, another lifelong mate
in the making, Roadrunners packing lizards
and snails to their nest in prickly pear cactus.

The heavy-limbed sycamores shade a ribbon
of green along the dry creek bed, sub-irrigated
Bermuda grass a few bulls graze between bellowing.

Black cows shine on a side-hill grade, either side
of the canyon, or silhouettes in shade gossiping
and grinding cud, having shed their babies.

SUVs, RVs, camp trailers and fifth-wheels
escape the confinement of cities to dodge Covid-19
and logging trucks on a narrow mountain road

to the pines, and I don’t blame them—with
a thousand ways to go, why not migrate
where no one seems to worry about dying. 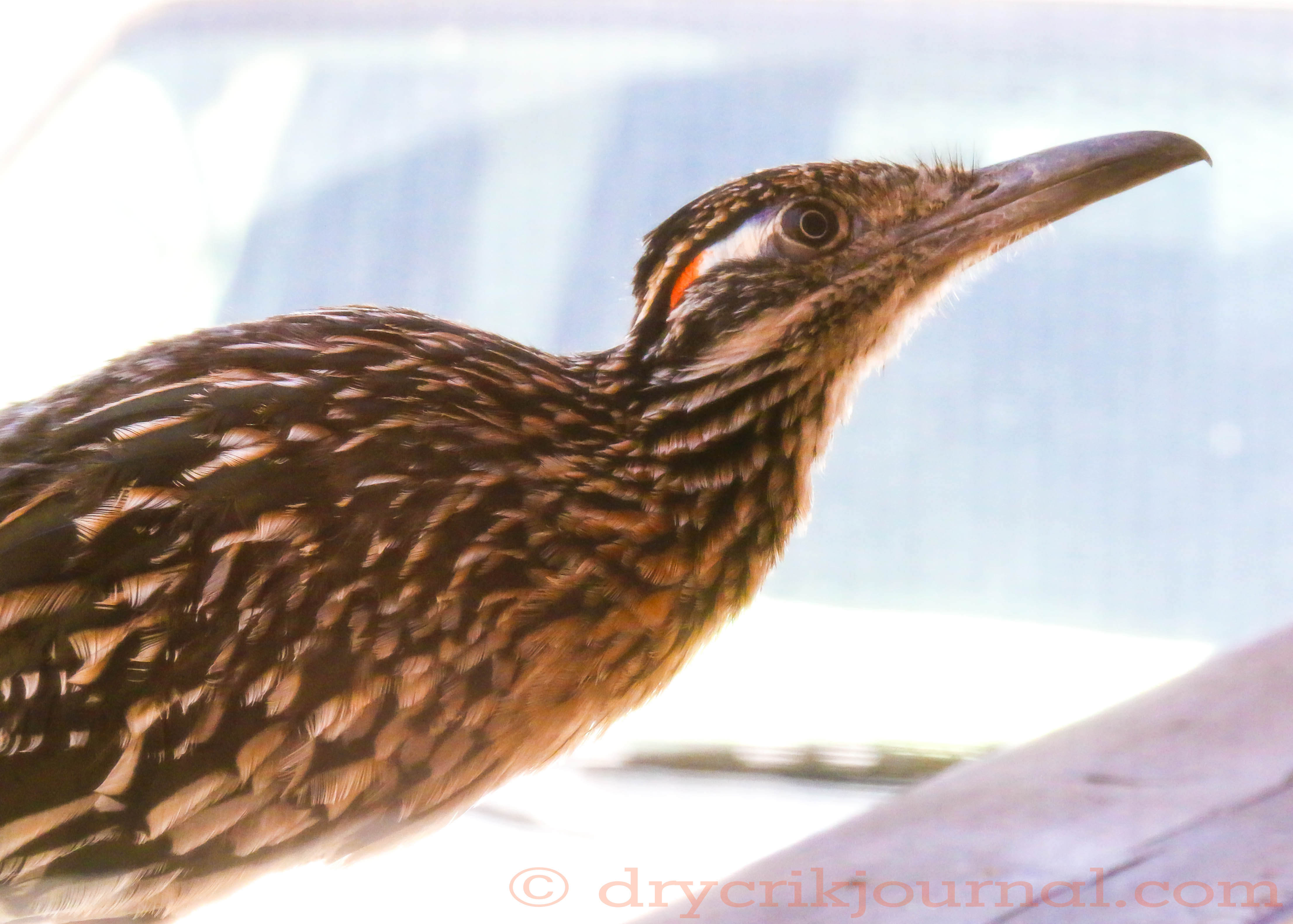 Light feet at dawn
inspect Iris and Aloe Vera
to crack shells on the rock
border between gravel and lawn.

She curtsies like a ballerina
in a low, feathered quivering,
teasing, anticipating
the dance in a garden arena.

CHORUS:
Beyond the reach of Covid-19,
the divisiveness and hate—
beyond the crazed confusion
the fools among us imitate.

Birds multiplying here to a dozen
as watchdogs for the unwanted,
the rattlesnakes and snails,
beyond the reach of poison.

CHORUS:
Beyond the reach of Covid-19,
the divisiveness and hate—
beyond the crazed confusion
the fools among us imitate.

On our way to gather the cows and calves for branding last Friday, we ran across two turkeys fighting within a rafter of twenty or so young toms along the creek.

It was a quiet combat for dominance, yet none of the rest seemed disturbed nor cared about the outcome. 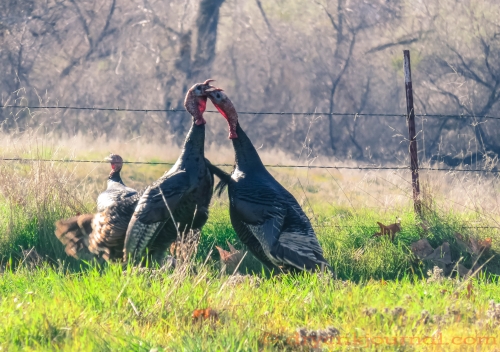 But as I began to photograph the battle with my point and shoot, the group slowly dispersed to leave the two toms battling alone. 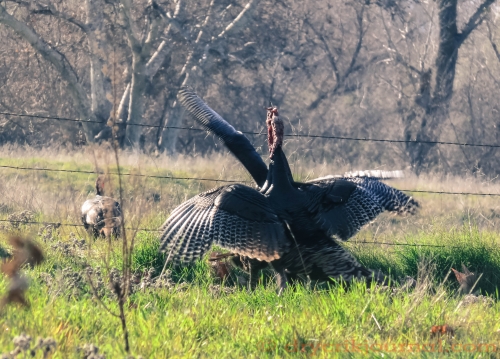 It’s that time of year, I suppose.

Velvet in the Wild Oats 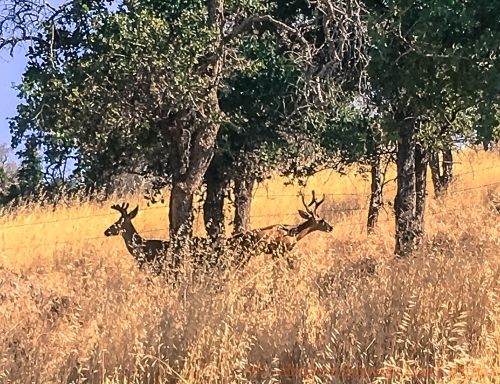 Good to see a couple of bucks in velvet this morning, especially close enough to photograph with a cell phone while we were hauling some young cows up the hill to replace the old ones we took to town last week.