Sycamores are greedy,
take all the water they can,
believe in unlimited growth
they can’t support, lose limbs
with the crack of a rifle shot:
leave wilting proof
of gravity
upon fences
along the road
over and over again.
They never learn.

would hear the call
that hung unanswered
from the hammered timbers

stretched across the cool
adobe walls, I was inspired
to dream on Sundays:

to preach a calloused,
hands-on gospel
of an understanding God,

to walk among common
quandaries and offer all
the solace I could muster.

Of the many daydreams
that danced beneath the red-tiled
roof, you followed true.

On Guns and Poaching

I bought my first gun when I was 12 by saving my summer wages swamping lug boxes of Red Malaga grapes out of my father’s and uncle’s vineyards. A few weeks before the opening of Dove Season, I sent a $109.95 money-order to Sears and Roebuck for a 20 gauge Model 12 Winchester shotgun. The box came addressed to me in the mail.

Before that, I hunted dove and quail with Stevens .410 single-shot and roamed the foothills on cow trails shooting ground squirrels with a used, J C Higgins single-shot .22 rifle that my mother’s cousin, Stanley Dickover, had given me for Christmas when I was 10. Different days and times, my parents would likely have been thrown in jail today for turning a youngster loose with a gun. But I loved it—not the killing as much as the hunting and exploring.

In those days, finding a place to hunt was not difficult. For me, there was always the ranch. But most all of my teenage friends had permission from local landowners to fish and hunt whatever was in season. Poaching happened, but was seldom an issue in this small community where everyone knew everyone else, when a young man built his reputation early in life.

In the mid-60s with the advent of affordable air conditioning, the local population began to explode, and with more people, less places to hunt. Trespass and poaching became serious problems for landowners who lost livestock, had water troughs shot full of holes and experienced a general increase in vandalism that impacted their operations. Then again, the clash of cultures after the Vietnam War when many Hmong refugees, used to living off the land, were relocated to the Central Valley.

Today, the prices of guns and ammunition, as well as license and tag fees to the California Fish and Game, continue to increase while places to hunt have decreased dramatically. It’s not surprising that poaching has become a problem, and in some instances, a business where deer, feral hogs and livestock are butchered in backyards and the meat sold locally. While budgetary restraints have wardens stretched thinly, the problem of poaching falls precariously on landowners more than ever before. Rather than to have to sort the good guys from the bad, we are inclined not give anyone permission to hunt.

Today’s poachers seem to believe that if they have a gun, they have a right to hunt anywhere they want, indignant when caught, and blame the landowner when prosecuted. Our latest incident on July 22, 2012, a slam-dunk case for the Fish and Game and D.A.’s office with indisputable photographic evidence, has to be pursued if we expect help and support from local wardens in the future.

I’ve never been an advocate of stricter gun laws, but if the common belief that the purchase of a gun increases one’s rights while diminishing the rights of others, then something has to change. 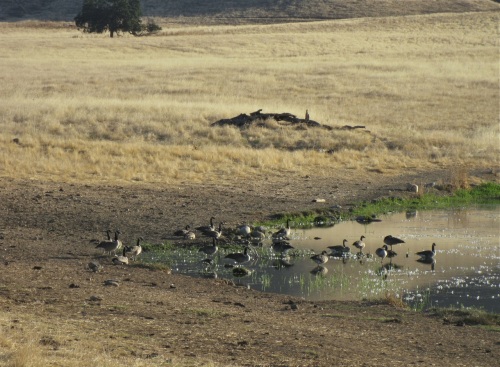 Though high temperatures have dropped into the 90s, I’m trying get out and around early to keep the sun off my face. My back is taped with a battery of patches to give my dermatologist a clue as to what I’ve become allergic to that has triggered my immune system to keep producing new skin on my face to burn, peel and itch continuously. After feeding our replacement heifers, then starting my irrigation water, I caught these geese at the pond at dawn. Quite tame and never flew while I open the gate to let water into the pipeline. 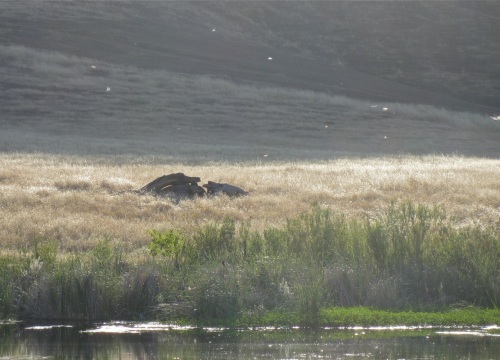 A tough shot into the sun, the dragonflies of all colors and shapes have begun to show, and sparkled this morning.

Portrait of a Poacher 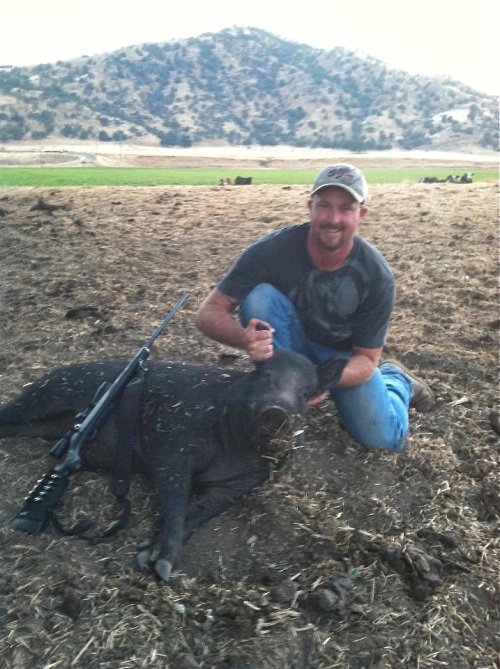 The evening before we were to ship our two loads of steers, this genius and his compadres were among them all on the irrigated pasture trying to kill a pig. He circulated so many photos of his hunting prowess, one was emailed to me. They left a gut pile in the creek and a trail of blood all the way to the road where they waited for someone to pick them up where they hid in the neighbor’s corrals.

Poaching is nothing new to us on Dry Creek, there’s always a new crop of youngsters that think that killing a hog makes them a man. Spencer (Rambo) Jensen used to crawl through grass without a gun and touch them before they knew he was there.

With Clarence on vacation and missing shipping for the first time in twenty years, Zach, Robbin and I were saddled and ready to gather the steers before 6:00 a.m., as they began filing off the irrigated pasture, and the dry feed along the road, as if an invisible rider was getting them up and started towards the corrals. Obviously not needing me horseback, the Kubota and I began scattering a few flakes of hay as most of the bunch walked into the corrals. Robbin and Zach eased the last few in and we were ready to weigh by 6:15 a.m. I ran the sprinklers in the corral Sunday afternoon to keep the dust down, but didn’t get the lane wet. We had plenty of time before we were scheduled to start weighing at 7:00 p.m. Trucks gone by 9:00 a.m., steers net 762# – Beautiful dawn, great day!! 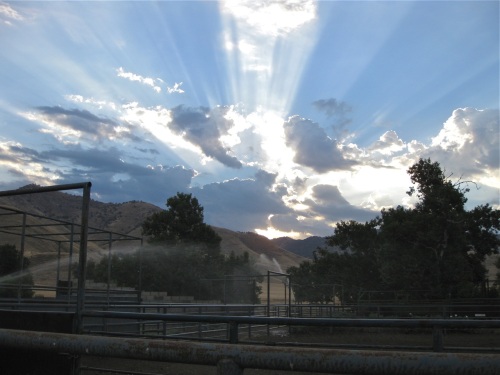 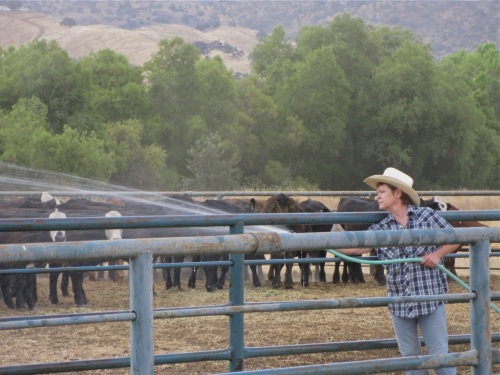 Red-headed woodpeckers take turns
at a Rainbird sprinkler dripping, sip
a drop at a time clinging to galvanized
pipe for hours in the summer, choose
a slow leak over a full water trough.

To survive, we adapt to the leftover
comforts of others, the leaks and
imperfections of progress, ignore
the loud and idle chatter striding by,
and focus on living with eyes open.

We’ve been meaning to check our first-calf heifers across the creek from the house for weeks, their first calves due by the middle of August. We hadn’t seen the cows on Top since we weaned their calves, nor the second-calf … Continue reading →

I could have written sooner to thank you
all—too many short notes with succinct
and caring phrases to count, too much
heart to consider, then bear, at once.

A man can drown in his own gratefulness
rising, hold his breath and hope he will float.
I think of all the doors cracked open for me,
peeks into other worlds, other ways of seeing.

It was all new once, each wisp a sign
of more to come, or to help me remember
my way home. But on the loose, youth
can be confusing chasing rabbits for the run

or fun of it. You may be still spinning in space
writing poetry with Ginsberg on Hale-Bopp,
but you gave me work when I needed it,
pride in what my hands could do, solace

in small and calloused accomplishment,
a place to go to find the truth flourishing
around me, wisdom and a strong distrust
of handsome faces and all government.