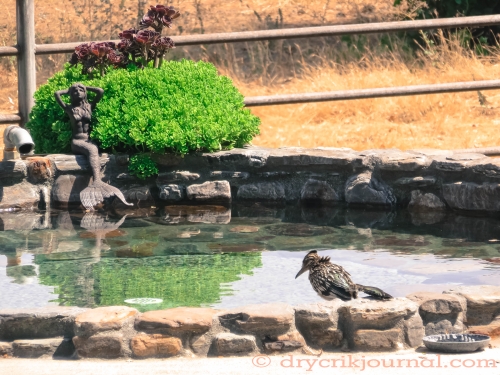 Turned out of the nest
to make a fortune
on lizards, snakes

and bugs, he explores
the mossy troughs
and warm dirt tanks

for a dependable drink.
Cold clean drops
roll down his throat

as he tips his beak
to the mermaid bathing
motionless—much

to contemplate
and forget
at the ‘sip and dip’

for young eyes I envy
like kittens and puppies
yet to learn the truth.

in poppies on Sulphur Ridge,
wildfires spread across the green
where snows have lain.

Always his drawing in my mind,
these golden slopes he climbed—
the poem wrote before he died

too young, thirty-five years ago.
Sulphur sings his song today,
remembering all we can’t forget.

Admitting defeat
with no where to go but up
can be contagious.

Portraits (4) of a Roadrunner

At my desk, a fluttering commotion outside the window. One of our several Roadrunners was trying to attack a metal silhouette of a crow on the window sill.

In the two feet between us, a screen door and window glass. 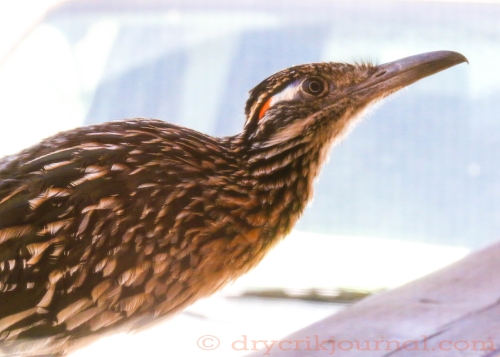 But a few of the many expressions of a Roadrunner…

Begging your indulgence for yet another photograph of the Roadrunners, an adult and juvenile, hanging around the cactus nest where one fledging remained yesterday afternoon as I came in the driveway.

We started in the dark to gather and preg-check our third-calf cows, make the sort of who stays where and who goes to town, keeping in mind our scarce stockwater resources. We shipped one bunch of calves Tuesday that sold well yesterday—we’ve been busy. Too busy to sit by the nest for photographs, so whatever shows up here is only by chance, nothing scientific about it.

We know the babies fledge and grow rapidly, and are as mobile as the adults when they leave the nest. Having an adult and juvenile together in a photo, it’s obvious the juvenile is smaller with a shorter tail. Notice also the differences in the eye of each. In a previous post, I assumed four babies in the nest, but revisiting the photo after comments, one of the eyes is that of an adult judging by its tail and the eye of this adult—so only three.

Yesterday evening one of our crow pair, who have been harassing and raiding the bird nests in the yard for several weeks, was at the cactus patch where the one fledgling remained. As the crow left with apparently nothing, an adult and juvenile went to the nest as if to rescue and encourage the last one to leave.

If there’s nothing in the nest this morning, I’ll have to count young beaks to see if it survived, an impossible task unless the three start running together.

No one to visit me
but this familiar stranger
with nothing to eat. 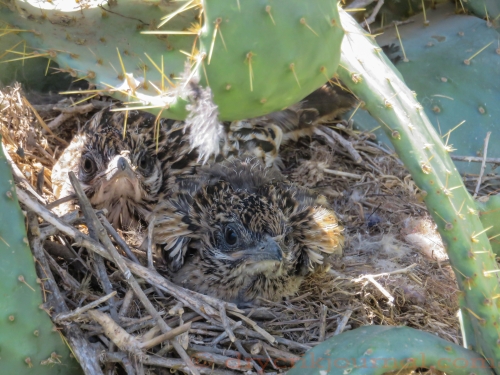 No reason to leave
the comfort of Prickly Pear
to make our fortunes. 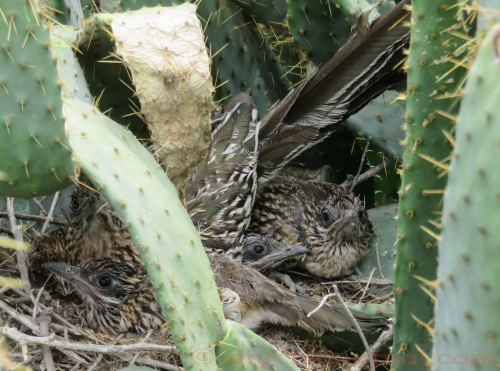 We found the Roadrunners’ nest on March 29th and have known the eggs had hatched for a couple of weeks, but the chicks have been too small to photograph until now. In the cactus along the driveway, I caught the pair off the nest this morning.

long tail feathers up,
eye to the outside perched
a week or more

near the water trough
while he patrols barn
and pasture, garden, yard.

reflecting distortions
between each beak attack
gone from their spot

and he is confused and lost
without purpose,
without a job at dawn

searching in circles
for the foe
who drew no blood.