No clock, no time—
free to look down
canyon home, the road

two thousand feet below.
Through 150 hazy years,
much the same

to native eyes, to the wild
that have survived
our good fortune.

At Wuknaw – Creation Myth of the Yokuts

This is the story of the last assembly of the old-time bird and animal people. After the meeting at Wuknaw, they went to live as we see them today.

When the bird and animal people had all gone to their new places, Tro’-khud, the Eagle, and Wee-hay’-sit, the Mountain Lion, went in a Tule house to talk about Mi’-eh, the new kind of people they were ready to make.
“How are we going to make these new people?” asked Wee-hay’-sit.
“I have a plan. I believe I can do it,” answered Tro’-khud.
Then Tro’-khud began. He took some dirt from the floor of the house and made a shape like the Indians are today, except that he made paws like Ki’-yoo’s, the Coyote, for hands and feet.
When Tro’-khud had finished making the dirt man it was almost night. He said, “Now we must set fire to the house.” Wee-hay’-sit took a brand from the fireplace in the house and set fire to the tules.
The house blazed high and made a dark smoke. As this smoke rose to the sky it began to rain. Tro’-khud and Wee-hay’-sit sought shelter under an overhanging rock.
Before morning the fire had burned out. The baked dirt man lay in cold wet ashes. “Now,” said Tro’-khud, “it is time to give this man a heart.”
“I can do that,” said Wee-hay’-sit.
“All right,” said Tro’-khud.
Wee-hay’-sit breathed on the man’s face and said, “Heh-deh.” The clay figure arose. It walked about and became the first Indian.
“Now,” said Tro’khud, “we must have a mate for the man.” They took a piece of the man and put it in a basket. They covered the basket with a Ki-o’-to, flat tray, and set it by the spring at Sho-no’-yoo. In the morning, as Tow-ahn’-itch, the Morning Star, was beginning to fade, Tro’-khud and Wee-hay’-sit looked in the basket. There they saw the first woman.
The first child of the man and his mate became the Wuk-chum’-nee tribe of Indians. They stayed around Ti-up’-in-ish and Sho-no’-yoo and along the Kaweah River in Lemon Cove Valley. They are our people.
The second child became the Pahd-wih’-she tribe. They went up the Kaweah River and lived in what is now Sequoia National Park around Pah’din, the Hospital Rock, and at Camp Potwishi. Their old village at Pah’-din was called Pahd-wih’-she. In the summer they went to Giant Forest to live among the many Toos-pung’-ish, the Big Trees.
The third child went North to live and became the Wuk-sah’-she tribe of Indians.
The fourth child went down the Kaweah River and became the Ta’-dum-nee tribe of Indians. Their old beginning village of Ta’-dum-nee was where the city of Visalia is now.
The fifth child went South to Tule River and became Ko-yet’-ee tribe of Indians. Their old beginning village of Cho-ko-wee’ was above Porterville where the Monache Golf Links are now.
The rest of the children of Mi-eh, the first man and woman, went out into the world and became the other tribes of Indians. In that way all the tribes of Indians came into the world. 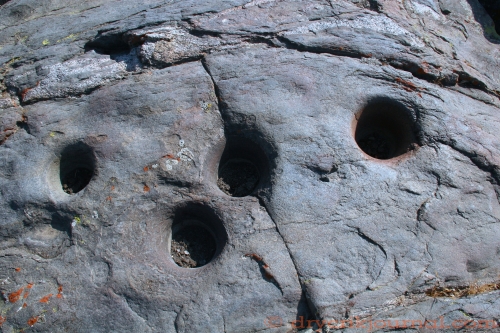 Soon after the first child was born to the first man and woman and became the Wuk-chum’-nee tribe of Indians, Tro’-khud and Wee-hay’-sit saw that there was going to be trouble. The new Indians had paws like Ki’-yoo and began digging in the side of Ti-up’-in-ish, the mountain at Lemon Cove.
They dug a big hole. They dug another hole at Colvin Point.
“This will never do,” said Wee-hay’-sit. “They will eat up the world. We must change that.”
So Tro’-khud decided that after all, hands like Kah’-cha Choo’-wuh, Small Gray Lizard, would be best. He changed their paws to hands and the Indians have had hands ever since.
Tro’-khud said, “We must keep all these people alive. We must not have them die.”
“How are you going to do that?” said Wee-hay’-sit.
“Well, when they die we will take them up to Awp-maw’-new, the old-time spring at Mankins Flats. We will dip them in the water and turn them over and over. Then they will all be young people again.”
“That will not be very good. We ought to have a Do-nee’-wish dance for the dead people once a year. If there are no dead people we have no chance for Do-nee’-wish. If somebody dies we can bring up our friends, Hoosh-min’-in, Northerners, Home-tin’-in, Southerners, Dahts-wun’-in, Westerners and Dum-tin’-in, Mountaineers.
“They can stay one week. We can kill plenty of meat and have a big meeting. We can have two Ah-ha’nitch singers and everyone can bring Cha’-wik, Indian money. That is the best way. Let them die and have Do-nee’wish dance for the dead people.”
Now Ki’-yoo had finished eating Po’-hut, the Squirrel, and he came over to where Tro’-khud and Wee-hay’-sit were talking. He said, “What are you talking about?”
“We were talking about Mi’-eh, the new people. Wee-hay’sit says to let them die and I want them to live.”
Ki’-yoo was pretty smart. He said, “No, it is not good to have them all live! They would fill this whole valley. Then what would we do when there is no place for us to go. They would kill Hoey’, the Deer, Po’-hut, kill me. Then, no more Ki’-yoo. How are you going to feed that many people?”
Tro’-khud, the Eagle, said, “We will fix that. They won’t need much to eat. We will give them a little piece of acorn bread and they must only eat a little bite. They can put it away and when they want another bite it will be big again. It will never get any smaller.
“We will give them a basket of acorn mush and when they eat some, it will get full again. We can fix that. It will work all right.”
“No, no,” said Ki’-yoo. “You let them die, then they can feed themselves.”
So Tro’-khud, the Eagle, and Wee-hay’-sit, the Mountain Lion, decided to let the new people die when they got old. That is why the Indians must die now and can’t live always.
– F.F. Latta (“California Indian Folklore”)

Lemon Cove in the Rain 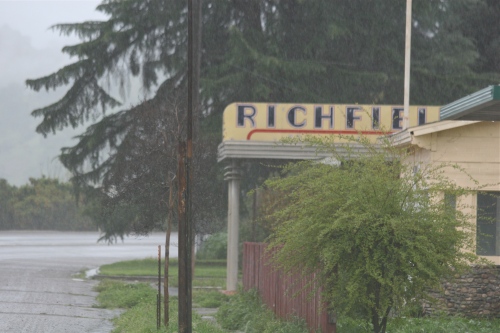 These 2006 photographs caught my eye while looking for some color here, for something other than poetry, and even these gray shots of Lemon Cove lift my spirits. The fog, clinging to these saturated hills since the New Year, drizzles today, weighs heavy on the eyes and mind. We haven’t seen our cattle for a month, haven’t got a calf branded, ground too wet to get a pickup to them.

Clarence drove his Kawasaki Mule to the Paregien Ranch in the fog yesterday, choosing the cold and wet over pacing the house, to find the rain gauge full, roads sloughed and so wet, we’ll probably have to ride from Dry Creek to gather and brand them after a week or so of sunshine and no rain.

I haven’t been across the creek since our Corb Lund replay of ‘The Truck Got Stuck’ New Year’s morning with the birders, my son and the neighbors, since another inch and three-quarters rain. The work is stacking-up as we begin to think about Elko, wondering how we’re going to get it all done.

ABOVE THE EDGE OF STEEP

A gray sea laps the foothills, fills the Valley, creates
islands of mountain tops above the muffled sounds
of humanity, we can’t see, moving along the road

below. The rumbling crush of rock, farther off,
where creek greets river, where diesel engines
load and groan to the highway running deeper

towards the flatlands into fog. Warm above the shoreline,
we squint into the sun as naked oaks washed in drifting
mists become submerged, reach-out crying for a hand

before the last limb is engulfed – and we become
Jeffers’ horsemen above the Coast Road, hooves wet
with green, listening to the busyness of progress

bubbling-up. I watched the silhouette of a man
swing a sledgehammer in the fog when I was young,
at the peak of his arc before the sound of his last blow

reached me – and so it is off these narrow ropes
of blacktop. We are that horseman’s children still
riding higher, climbing towards the clear and timeless,

where the voices before us can whisper in sleep,
where trees and rocks dance with hawks, and we
sing poetry around a fire above the edge of steep.