We had water enough for play in furrows
with scraps of wood, leaves for sails,
regattas on rivers pumped from underground.

All the magic that children take for granted
swirled to the hum of electricity, twenty-horse
pumps like Buddhas squat in orchard rows

my father farmed for wagonloads of fruit
ripe for the rail, packed by women’s hands
for the road on diesel trucks to distant places.

overshoes—checking water, irrigating grapes
at seventy, or so I think at sixty-eight, knowing
now what drew him to the earth he farmed. 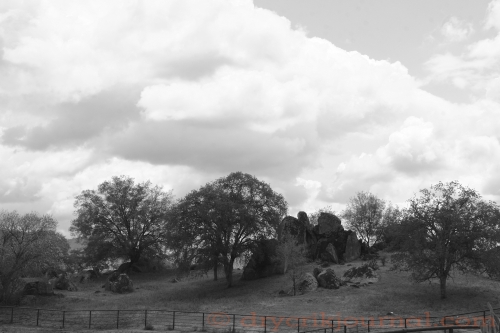 This ground recovers our presence
with leaves and weeds, most all
of our mistakes erode with flowers,
explode with colors leaving seed

of hands. Calloused hands, hands
a horseback that track our thoughts
when we were green and learning
to see and think the hard way.

As we breathe, all the chiseled chins
of the rough and gruff retreat
to live as monuments in rock piles
with the honesty of rattlesnakes—

an immortality stirred into the earth
that can’t be purchased, but is always
upon always like the layers of dirt
our future depends, rooted within.

Then the man noticed that he didn’t
have any shadow. He went out and
looked around: nothing had any shadow.
He began to squint up his eyes, it was
all so bright. And wherever he looked
there were sharp little knives.
– William Stafford (“Stories To Live In The World With”)

1.
We were but shadows on this ground,
young bulls bellowing into space
hoping for an answer in an echo—
not rivals down canyon pawing dirt.

We cast more shade now as we go
remembering the bluff and bluster
of manifest destiny—the arrogance
of greed blest by God—feeble-legged,

stumbling in cobbles along the creek.
If left alone for a century or two,
time will heal the tracks, erase mistakes
we might have better learned by.

2.
It did not begin or end there. Three
hundred shadows passing in this canyon
when Sir Francis Drake stabbed
California sand for Queen Elizabeth I

leaving little sign of how their minds
worked grinding, making palatable
what was at hand until—you know
the rest—like echoes in these hills.

3.
Pages welded together in dark corners,
transcripts in generational stacks
only attorneys dream of designing,
hold both petty and valuable details.

How it shook the old house, my father
overwhelming his in a thunderous
shouting match, a sparring over nothing
to hone a keen edge for the Corps.

Or the luxury of divergent dreams
of royalties instead of rent, in-laws
and family divided and divorced with
land—and from the tracks cut deep.

4.
We are but shadows on this ground
passing beneath us as always, immigrants
in old space that cannot stay the same
in the new world that swirls around us,

an invisible adversary invading our air,
our flesh, this dirt we shall return to—
however gladly or reluctantly, to cast
no more shadows—at home at last.

Stories To Live In The World With (Someday Maybe, 1973)

A long rope of gray smoke was
coming out of the ground. I went
nearer and looked at it sideways.
I think there was a cave, and some people
were in a room by a fire in the earth.
One of them thought of a person like me
coming near but never quite coming in
to know them.

Once a man killed another, to rob him,
but found nothing, except that lying
there by a rock was a very sharp,
glittering little knife. The murderer
took the knife home and put it beside
his bed, and in the night he woke
and the knife was gone. But there was
no way for a person to get in to take the knife.

The man went to a wise old woman.
When she heard the story, she began to laugh.
The man got mad. He yelled at the woman
to tell why she was laughing. She looked
at him carefully with her eyes squinted
as if she looked at the sun. “Can’t you
guess what happened?” she asked.

The man didn’t want to be dumb, so
he thought and thought. “Maybe the knife
was so sharp that it fell on the ground
and just cut its way deeper and deeper and
got away.” The woman squinted some more.
She shook her head. “You learned that from
a story. No, I will tell you why you
thought the knife was gone and why
you came here to ask me about it:
you are dead.”

Then the man noticed that he didn’t
have any shadow. He went out and
looked around: nothing had any shadow.
He began to squint up his eyes, it was
all so bright. And wherever he looked
there were sharp little knives.

This is a true story. He really was dead.
My mother told us about it. She told us
never to kill or rob.
At a little pond in the woods
I decided: this is the center of my life.
I threw a big stick far out, to be
all the burdens from earlier years.
Ever since, I have been walking
lightly, looking around, out of the woods.