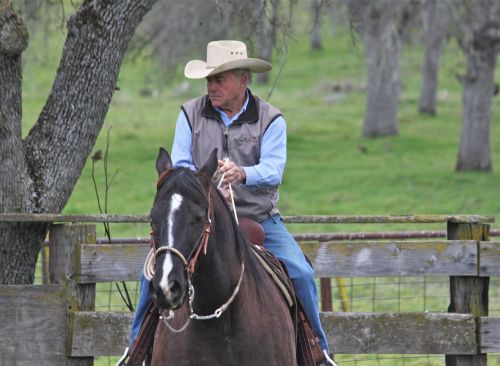 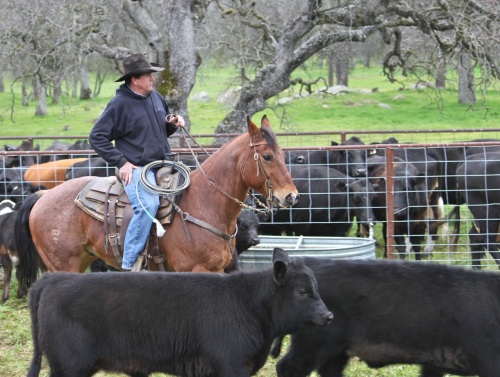 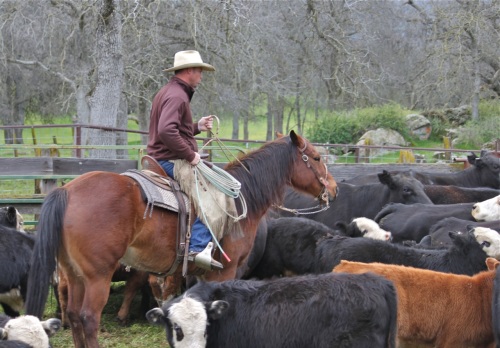 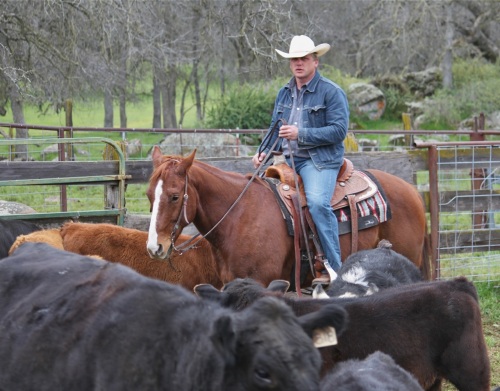 Dark, about to rain
(confirmed on NOAA) –
there is no poetry today,

no sweet metaphors left
on the watermelon wagon
as we bump along.

Instead, I listen for
the whir of early drops
upon the roof, ready

to fall into a long sigh
and broadleaf grin,
too edgy now to write.

The grass will come
on stronger, hold ‘til
the Ides of March –

until another, hopefully.
It’s dark, about to rain
buckets-full, they say,

promising for a week.
Slow arriving, late to stay
awhile, or miss these

Only now, does she allow entry
up Ridenhour as dawn glints
off goosenecks through bare oaks

below, rumbling of aluminum –
saddle horses brace the rutted cut
after weeks of rain, month of sun

on the steep, south slope – small
poppies first to rise in welcome
to her refurbished hall, narrow

upon gray fingertips. We drink
deeply and hold our breath,
climbing higher to brand calves. 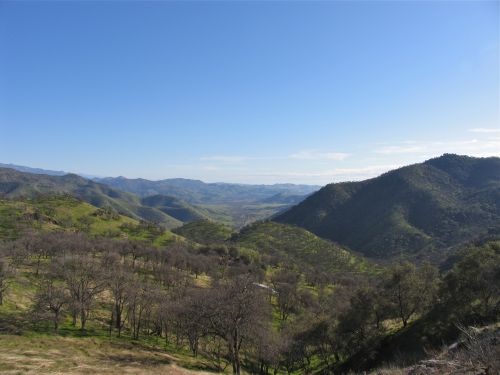 The Nature of Springs 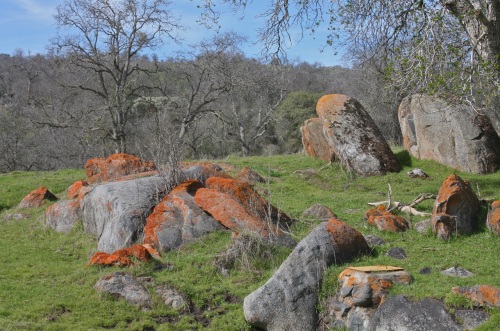 Good gather yesterday, branding calves this morning at the Paregien Ranch before the forecast rain.

While making a last circle in the Kubota, I had to stop to photograph the red lichen here at Windmill Spring, headwaters of Ridenhour Creek that contributes to Dry Creek, a mile and 1,500 feet down the canyon. There used to be a hand-dug well and windmill here, the latter disassembled and sold down the hill by a previous lessee, the former filled-in to keep cattle out. Good, dependable water, nevertheless.

Though I have no explanation, scientific or otherwise – lichen this red is rare around here – worth observing, occurring only one other place that I’m aware of at Effie’s (Hilliard) Spring on the Antelope Valley side of the Paregien Ranch, a stone’s throw from Wuknaw, the Creation Place for the Yokuts according to Frank Latta. And like any place with good water, there are native grinding holes atop these rocks.

With ample wonder and speculation, the stories come easily.

She woke on the edge of a clear stream and made her way to a mansion built on pillars of gold, whose silver walls glowed like a lantern in the sun. She ventured inside to find floors of precious stones, rooms of treasure and art, and comforting voices that she could hear but not see that invited her to dine, to bathe, to sleep, and to enjoy every imaginable comfort. She fell asleep to a chorus of angels, accompanied by a harp. – Teresa Jordan, (“Cupid: The Soap Opera”) http://www.yearoflivingvirtuously.com/?p=1649

‘Tis Cupid come in darkness
to dance in dreams, dear Psyche –
how we yearn like children

to unlock deep chests,
to comfort and confirm
our richest vulnerabilities,

our nakedness in the light.
O’ to be so simply mortal
is the envy of all the gods!

HOPE IS IN THE MOMENT

We are cast of stone, all kinds,
no two the same, amalgamations
worn by time’s erosion, by

wind, sun and rain – warming,
soothing, eating away towards
the core of our ultimate humility.

Even the lofty falcon’s perch,
gray-haired, exfoliates into the sea,
the Sierra’s teeth crumbling and

the cobble found to fit a hand
are finally sand, gravel for highways,
particles of dust stirred and inhaled

as strangers remembered, carried
in our chests. What do the eyes
truly see, searching for that mystic

connection of great and small, those
depths we explore where details meet
and fall in love, or lust, or like –

or as we gird for battle? Here,
in that moment there is no time
to relive the past or dream of some

future futility. The real action churns
with it all at once, in the current
like a river rushing, pooling, soaking

richly within us, before moving on.

I received this email from Dave Bourne this morning, as we get ready to brand a little bunch of our calves.

On Feb 9, 1853, Frank Desprez was born in Bristol, England. He’s best
known in the American West as the man who wrote “Lasca”…and is best known
in other parts of the world as the writer of well loved “curtain-raisers” or
companion pieces to Gilbert & Sullivan’s light operas. As a teenager, fresh
from a failed apprenticeship as an engraver, he and Willie Pinder, a cousin,
traveled to the States, and got work on a ranch in Texas for about three
years. Returning to England in 1875 by working as a ship’s steward, he
embarked on a career as a reporter, author, editor and literary reviewer.
In 1883, he married Jessie McQueen, the daughter of an officer in Her
Majesty’s dragoons, and they had three children. His family says he was a
quiet, modest man who never talked about his years in Texas. Frank Desprez
left this world in 1916.

Please, take 6 minutes out of your day to read “Lasca” aloud to someone you
love….tell ‘em it’s an early valentine. – D.B.

It’s all very well to write reviews,
and carry umbrellas and keep dry shoes,
and say what everyone’s saying here,
and wear what everyone else must wear,
but tonight, I am sick of the whole affair.
I want free life and I want fresh air;
And I sigh for the canter after the cattle,
The crack of whips like shots in a battle,
The medley of horns and hoofs and heads
That wars and wrangles and scatters and spreads;
The green beneath and the blue above,
And dash and danger, and life and love and Lasca!

Lasca used to ride
On a mouse-gray mustang by my side,
With blue serape and bright-belled spur;
I laughed with joy when I looked at her!
Little knew she of books or creeds;
An Ave Maria sufficed her needs;
Little she cared, save to be by my side,
To ride with me, and ever to ride,
From San Saba’s shore to Lavaca’s tide.
She was as bold as the billows that beat,
and as wild as the winds that blow;
From her little head to her little feet
She swayed in her suppleness to and fro
with each gust of passion; like a pine,
That grows on the edge of the Kansas bluff,
And wars with the wind when the weather is rough,
Is this Lasca, this love of mine.

She would hunger that I might eat,
Would take the bitter and leave me the sweet;
But once, when I made her jealous for fun,
At something I’d whispered, or looked, or done,
One Sunday, in San Antonio,
To a glorious girl in the Alamo,
She drew from her garter a dear little dagger,
And sting of the wasp! It made me stagger!
An inch to the left, or and inch to the right,
And I shouldn’t be maundering here tonight;
But she sobbed, and sobbing, swiftly bound
Her torn reboso about the wound,
That I quickly forgave her. Scratches don’t count
In Texas, down by the Rio Grande.

Her eye was brown-a deep, deep brown;
Her hair was darker than her eye;
And something in her smile and frown,
Curled crimson lip and instep high,
Showed that there ran in each blue vein,
Mixed with the milder Aztec strain,
The vigorous vintage of Old Spain.
She was alive in every limb
With feeling to the finger tips;
And when the sun is like a fire,
And sky one shining, soft sapphire,
One does not drink in little sips.

So why did I leave the fresh and the free?
That suited her, and suited me?
Well, listen a while and you shall see
that this be sure, on earth and air
God, and God’s laws, are everywhere,
and Nemisis comes on foot as fleet
to the Texas trails as to Regent Street.

The air was heavy, the night was hot,
I sat by her side, and forgot-forgot;
Forgot the herd that were taking their rest,
Forgot that the air was close, oppressed,
That the Texas norther comes sudden and soon,
In the dead of night or the blaze of noon;
That once let the herd at its breath take fright
and nothing on earth will slow their flight,
And woe to the rider, and woe to the steed,
Who falls in front of their mad stampede!

Was that thunder? No, by the Lord!
I sprang to the saddle without a word,
One foot on mine, and she clung behind
Away! On a wild chase down the wind!
But never was fox hunt half so hard,
And never was steed so little spared.
For we rode for our lives.
You shall hear how we fared.

The mustang flew, and we urged him on;
There was one chance left, and you have but one;
Halt, jump to the ground, and shoot your horse;
Crouch under his carcass, and take your chance;
And, if the steers in their frantic course
Don’t batter you both to pieces at once,
You may thank your stars; if not, goodby
To the quickening kiss and long-drawn sigh,
And the open air and the open sky,
In Texas, down by the Rio Grande.

The cattle gained on us, and, just as I felt
For my old six-shooter behind my belt,
Down came the mustang, and down came we,
Clinging together, and what was the rest?
A body that spread itself on my breast.
Two arms that shielded my dizzying head,
Two lips that hard on my lips were pressed;
Then came thunder in my ears,
As over us surged the sea of steers,
Blows that beat blood into my eyes,
And when I could rise-
Lasca was dead.

I hollowed a grave a few feet deep,
And there in earth’s arms I laid her to sleep;
And where she is lying, no one knows,
And the summer shines and the winter snows;
For many a day the flowers have spread
A pall of petals over her head;
And the little gray hawk hangs aloft in the air,
And the sly coyote trots here and there,
And the black snake glides and glitters and slides
Into a rift in a cottonwood tree;
And the buzzard sails on,
And comes and is gone,
Stately and still like a ship at sea;
And I wonder why I don’t care
For the things that are like the things that were.
Does half my heart lie buried there
In Texas, down by the Rio Grande?

For grass and cattle, we pray
for rain until the draws run
with tree frogs in January –

until hills leak and release
rocks imprisoned in their clay
for more than centuries.

When gray heavens hover lower
and press heavily upon our minds,
engulf us all in cloud and fog

for a month, we pray for sun
until wildflowers come, now afraid
of an early spring in February.

Forecasts vary, prophets proliferate,
everyman a soothsayer, we pray now
for time to get the work done. 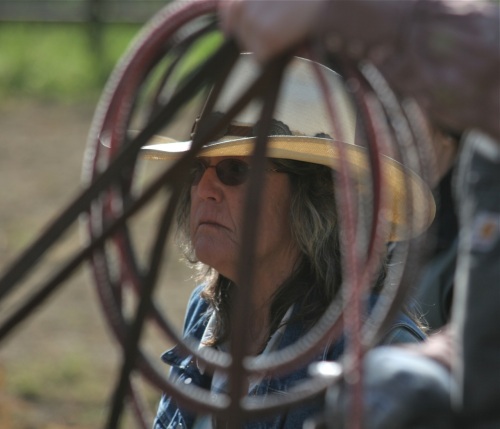 A beautiful, spring-like day around 70 degrees, Robbin & I had a ball taking over 500 photos between us. Nice calves, good people – reminding us how lucky we truly are.