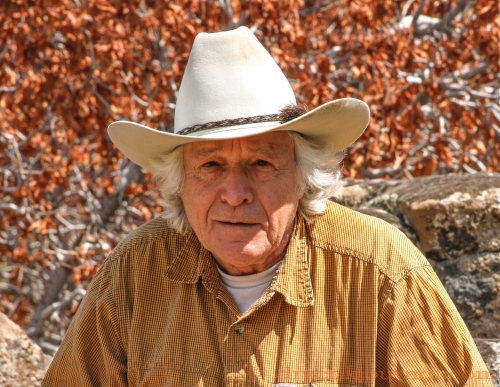 The message from Aiyanna Elliott was sketchy other than Jack was having a birthday. By August 1st I learned the date on Facebook. The folk music legend and two-time Grammy winner just turned 89.

In the fall of my freshman year at USC (1966) some friends and I went to see Jack at the Ashgrove, $2 cover and 2-drink minimum. It was a fantastic show, as close as I ever was to being home while going to school in L.A.

I ran into Jack again in 1989, my first invitation to the National Cowboy Poetry Gathering in Elko. We’ve been fast friends ever since. Beginning with traveling and playing with Woodie Guthrie to the present, he has been an inspirational influence on folk music. In 1998, President Bill Clinton awarded Jack the National Medal of the Arts, proclaiming, “In giving new life to our most valuable musical traditions, Ramblin’ Jack has himself become an American treasure.”

Though Jack has been to the ranch several times, the photo above was taken here in September 2008. Jack had a few gigs at some colleges inland from the Gulf of Mexico during hurricane season. He called to see if he could layover here at the ranch until either Gustav or Ike (I can’t remember which) made landfall, thus having four hours of driving time behind him. He stayed with Robbin and I for a few days while waiting to see which gigs would be canceled.

To one of the kindest souls we know, Robbin and I wish Ramblin’ Jack a belated Happy Birthday!