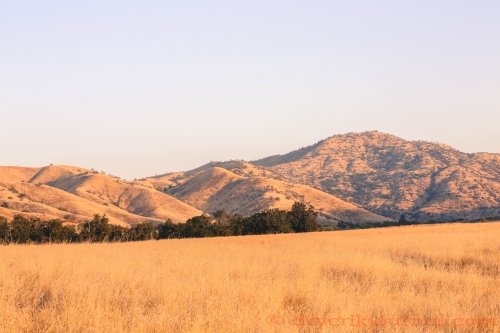 Our rainfall fared better than the Coast Range and Southern California last season (October through April), breaking a four-year drought for the Southern Sierra Nevada foothills with some good spring rains that have left us a legacy of ample dry feed as we approach the fall. The sun was just breaking the ridge (to the right of the photo) this morning, the base of Davis Mountain and Dry Creek still in shadow.

Followers of this blog know that August is our indicator month, a thirty-day cycle yet to be confirmed in September, as a layman’s forecast of our weather in October and November, the beginning of our rainy season. As the Emperor Grape season often went well into October, my father depended on this approach for getting his grapes picked before the rains.

From the Solstice to August 25th, we’ve had only three days here with highs below 100°— warmer than average, though I suspect our morning lows have been cooler than average. Discounting monsoonal flows that were nearly nonexistent this summer, we are now experiencing our first indication of a weather change. A cursory look at our weather journal, yet to be confirmed in September, indicates a fairly stable pattern with little rain. The Old Farmer’s Almanac and other early prognostications call for a drier than normal fall and winter that may translate into a trend towards more dry times.

Climate Change has become a political argument stretched to unreasonable extremes, but from our vantage point, hot and dry are the current reality, regardless of causes, that we must live with and adapt to in this business. The much-ballyhooed El Niño failed to relieve much of California, defying all weather models. Assuming the extreme weather conditions all over the planet, that have impacted more than just agricultural interests, have also defied most patterns, I’m guessing a whole new set of computer models are being developed.

We are engaged in a weather-dependent way of life we call a business, and console ourselves by conferring a feminine gender to our weather, repeating our mantra, often in awe, by saying “she can do whatever she wants, whenever she wants.” With the bulk of summer behind us, we have enjoyed pleasant evenings and mornings for most of August.

This entry was posted in Photographs, Ranch Journal and tagged photography, weather. Bookmark the permalink.